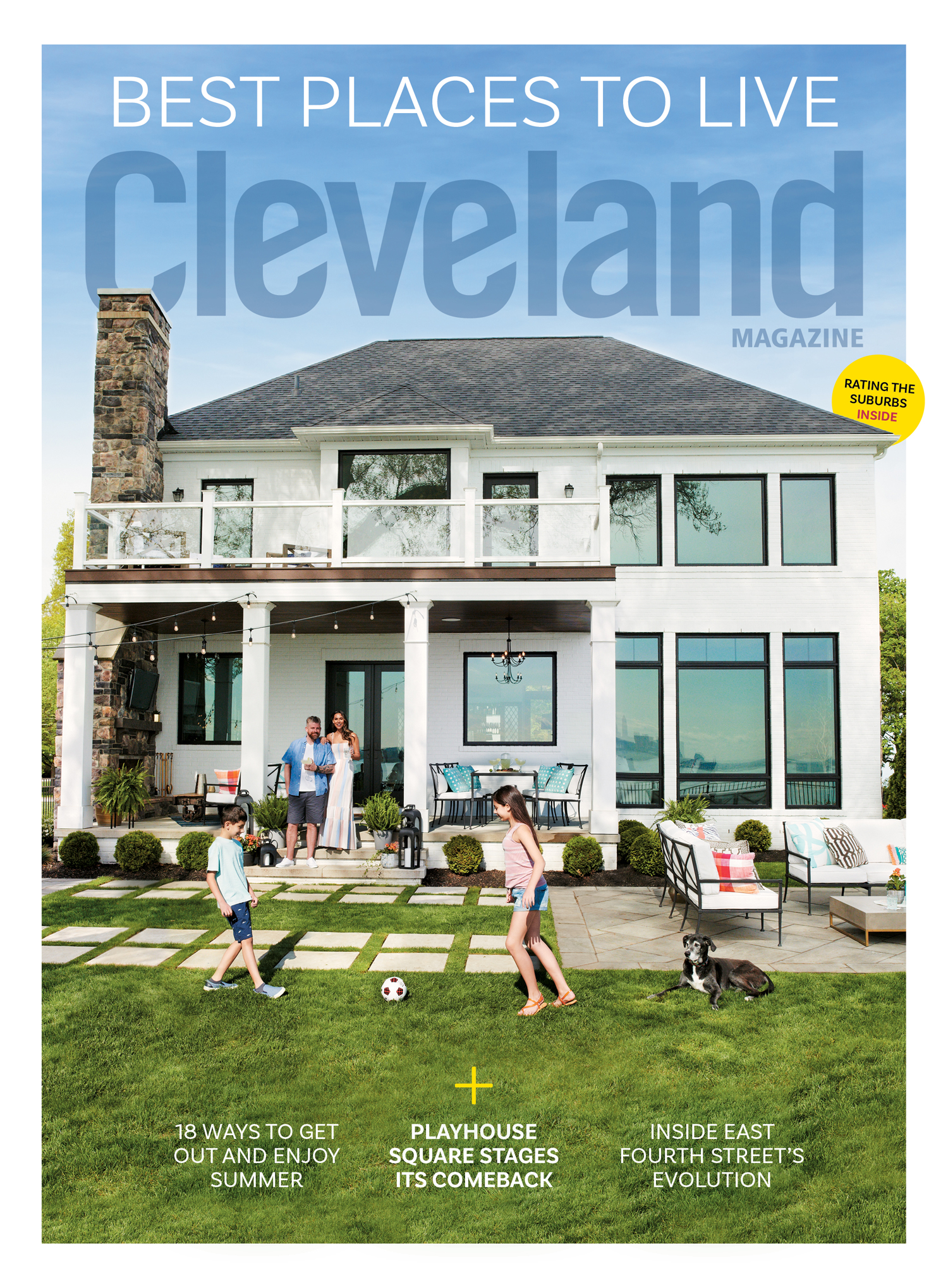 Best Places To Live: Why 77 Clevelanders Love Their Suburbs

Where we live is more than a zip code. It's a place we call home — a community we feel connected to, a way to build friendships and start a family.

Twelve Literary Arts Debuts "In Search of the Land"

With the help of more than 60 artists, the new album launches on Juneteenth as a celebration of Black identity in Cleveland.

From barbecues to blueberries, 'wurst to watermelon, we've collected a round-up of our greatest summer recipes and cooking tips.

How East Fourth Street Is Evolving

From old staples to newcomers, here's what the bustling dining street looks like now, and what it has in store.

Despite taking out his 1975 Lincoln and two of his cats, Danny Greene escaped from the bombing with minor cuts and bruises.

Can Assembly For The Arts Help Local Creatives?

Editor's Note: More Than A City

Editor Kim Schneider discusses this year's Best Places To Live and why all 77 suburbs are the true winners this year.

After a decade of planning and construction, the new memorial honoring victims of serial killer Anthony Sowell is expected to be completed by the fall.

The Cavs big man spent the 2020-21 season raising awareness and giving back to local businesses affected by the pandemic.

The former Cleveland Innovation Project head took over as president and CEO of the Great Cleveland Partnership in April.

Twelve Literary Arts Debuts "In Search of the Land"

With the help of more than 60 artists, the new album launches on Juneteenth as a celebration of Black identity in Cleveland.

Gone Soon: Catch These Cleveland Art Exhibits Before The End Of June

Experimental photographs, woodcuts and more are on display in these three area exhibitions.

How the Maelstrom Collaborative Arts Is Reconfiguring Performance

We sit down with executive artistic director Jeremy Paul to discuss the three things everyone should know ahead of Maelstrom's June performances.

Jordan Wong's The 10,000 Things Is A Journey Through Childhood

From anime to traditional Chinese paintings, the local artist's youth is on display at the Akron Art Museum.

With a formal opening June 11, the Cleveland theater staple aims to get back to its prepandemic glory.

As the executive director of Main Street Amherst, Teresa Gilles and her team of nine volunteers are working tirelessly to make Amherst a better place to live.

Despite only being 16-years-old, Aurora sophomore Carmen Courtad has spent most of her life giving back to her suburb.

In 2016, a 22-year-old Mikayla Hyland saw Avon Lake's generosity up close. Now she's inspired to make that same impact in the community she calls home.

After moving to Bath Township in 2005, Maia Beatty quickly fell in love with the suburb's charm.

Thirty years ago, Roderick May met his wife in Bedford Heights. Now he'd never move, not even for a million dollars.

With the purchase of Mootown Creamery, Angela Brooks has joined Berea's thriving population of small businesses.

Local artist Mitzi Lai planted her roots in Broadview Heights, where she loves capturing the changing season on canvas.

A lifelong resident of Brook Park, Terry Hudak-Johnson couldn't imagine living anywhere other than the West Side suburb she calls home.

Like most Brooklyn residents, Greg Liebert looks forward to Friday night football and its impact on the community.

For Bob Stec, Brunswick's strong sense of family and community is what pushes the southwestern suburb above all others.

High School graduate Anna Weiss has begun to find herself in this Geauga County suburb.

With so much of the Cleveland Heights community shopping and eating in the community, Leatrice Clark cherises her suburb's ability to support one another.

With a local government that builds on ideas from citizens, Cuyahoga Falls resident Debbie Ziccardi feels comfortable and confident in the suburb's ability to adapt and grow.

For Nathaniel Martin, the spirit of East Cleveland's residents is what pushes the suburb above other suburbs.

Much like the factory he works at, Elyria's Tennyson Thomas is a homegrown product of the West Side suburb.

Whether he's walking his dog at one of Fairview's many parks or getting all A's in the classroom, sixth grader Reed Ross already has a plenty of positive memories in the West Side suburb.

Nichelle Daniels, the first elected African American onto Garfield Heights' school board, sees the East Side suburb as the perfect place to raise her children.

Best Places To Live: How We Did It

The algorithm rules all. Here's a sneak peek at the methodology behind the Rating The Suburbs rankings.

A city transplant, Alexa Marinos' love for Independence is built around the southern suburb's 'perfect location.'

After starting "Because I said I Would," a nonprofit out of his Lakewood home, Alex Sheen has fallen more in love with the city's strong sense of community and volunteerism.

As a kid growing up in Lorain, Reinaldo Contreras III always looked at fashion differently. As the owner of Relic Clothing 3, he's trying to help the rest of the West Side suburb see those differences too.

A former fire chief who raised six children in the East Side suburb, Joe Sweeney knows a thing or two about what makes Lyndhurst special.

Amy Brown first stumbled upon Macedonia by accident three years ago. Now, she and her husband wouldn't want to call anywhere else home.

Whether she's enjoying a night at Maple Heights Lanes or getting a sweet treat at Baraona's Bakery, LA Phillips loves all the things to do in Maple Heights.

Since moving to Mentor-on-the-Lake in 2014, Brandon Towns has become a pivotal part of the East Side's suburb's community.

After seeing an ad in The Plain Dealer, Lacretta Incorvaia drove through the homes being built in Middleburg Heights. It was in that moment she knew the suburb was home.

With so many parks and historical sites throughout North Olmsted, Nasreen Starner has no shortage of reason to love this Cuyahoga County suburb.

A 15-year resident of Oakwood Village, Christopher Callender loves how the community has come together for a voter registration drive and other issues.

Emily Sheetz lets you in on some of her favorite Olmsted Falls eats, ranging from ice cream, chicken marsala and gas station hummus.

As a lifelong resident and advocate for Painesville, Ryan Gilkerson loves the East Side suburb for its diversity.

Whether it's the one-mile exercise path or the 22-hole disc golf course, Parma mayor Tim DeGeeter has plenty of reasons to love Parma's Veterans Memorial Park.

For Jennifer Hihn, this year's No. 1 suburb is more than a home. It's a place to grow a small business.

Breathtaking views, a picturesque library and a stunning lakefront are just some of the reasons Rosa Gee has fallen in love with Sheffield Lake.

With his mobile car detailing service business thriving through word-of-mouth in the community, Von Jones has become a mainstay in Stow.

As the president of Twinsburg's City School District Council PTA, Joanna Schaus gets a first-hand look at how the school's PTA impacts student's lives.

After moving to University Heights a year ago from Long Island, Elle Muhlbaum has loved being able to learn her neighborhood by foot.

With a strong school system in a predominantly African American neighborhood, Warrensville Heights has everything Santonya Jones needs.

Best Places To Live: Why 77 Clevelanders Love Their Suburbs

Where we live is more than a zip code. It's a place we call home — a community we feel connected to, a way to build friendships and start a family.

While some of the stores in Willowick might look different from when Jennifer Boresz Engelking grew up there, the community's friendly, neighborhood-drive attitude remains the same.

Build Your Own Backyard Escape With These Pool Trends

Make a splash with these three trendy pool styles. Plus, what to consider before diving into your pool construction.

From low inventory to low interest rates, here's how changing trends will affect sellers and buyers.

How To Accent Your Home With Fittings Metal Collection

Architectural Justice owners James and Darlene Justice give us the scoop about their steel accessories collection.

Looking For A Real Estate Agent In Cleveland? Here's How To Find A Good Fit

From location to experience, here's a few factors to take into account when choosing an agent.

This Ohio City Kitchen Has Us Green With Envy

Local interior designer Bridget Beverstock went with a bold color, brass details and other design tweaks to refresh this kitchen.

Here's how to be prepared and confident when buying your first home.

With subtle Cleveland-focused designs, Legend Headwear puts together something special in each cap.

The newly created 20,000-square-foot seating area is the perfect place to relax this summer.

From one-mile jaunts to 8Ks, lace up your sneakers and hit the pavement for one of these area races this summer.

Pack up the leash and bring your dog with you to these dog-friendly events at Terrestrial Brewing Co., Stan Hywet and Debonne Vineyards.

Reinvent your shopping routine and check out the goods from farmers markets in Chagrin Falls, Tremont and the Cuyahoga Valley National Park.

Summer Fun Guide: Admire Northeast Ohio From The Treetops At The Holden Arboretum

Go for a stroll 65 feet above the ground on the Arboretum's Murch Canopy Walk.

Summer Fun Guide: Catch A Ride On The BrewBoat

Bask in the majestic views of Cleveland's skyline on a 15-person boat that guests pedal themselves.

Spend a day (or week) riding a coaster into the clouds at the Sandusky amusement park.

Summer Fun Guide: Celebrate Love For All At Pride In CLE

The LGBT Community Center of Greater Cleveland hosts a parade this year at Edgewater Park.

Whether it's beach volleyball, softball or another sport, Cleveland Plays and Stonewall Sports Cleveland are looking for teammates.

This year's outdoor concert series features some of the best tribute bands from across the country.

Summer Fun Guide: Hear It All At Blossom Music Center

The Cleveland Orchestra is back on stage offering a plethora of performances throughout the summer.

Summer Fun Guide: Listen To The Music With Concerts Over The Valley

At Mapleside Farms, bands like the Spazmatics become your summer soundtrack.

With retro train cars that date back to the 1940s, a ride on this railroad is the perfect place for everything from a date night to a fun family activity.

Batter up! The Akron RubberDucks, Lake County Captains and Lake Erie Crushers have fun promotions and giveaways for fans.

With 30 vendors carrying everything from handcrafted jewelry to graphic art pieces, the monthly summer market at Van Aken has something for everyone.

Beat the heat with some of our favorite summer sips from Great Lakes Brewing Co., Market Garden Brewery and more.

Opening July 1, Private Lives: Home and Family in the Arts of the Nabis, Paris, 1889-1900 paints an ominous picture about everyday life.

Whether you're going down the course's 989-foot hill or watching from the stands, this year's derby should have plenty of heart-pumping action.