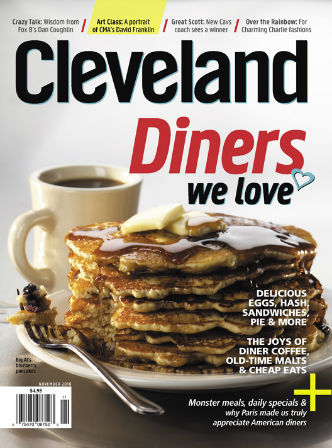 Start your day with a morning diner special.

Pull up a stool, and dine on the super cheap.

Admit it. You have a soft spot for corner booths and counter stools, endless cups of coffee and $1.99 breakfasts as much as we do. It's time to celebrate these greasy slices of Americana with our two favorite words: Order up!

As the host of three popular Food Network series and an NBC game show, Guy Fieri's career is on fire. This month, he'll also spice up the I-X Center's Fabulous Food Show.

Like many owners, Gus Kanis and his family came to American and found their place in diners.

It's not fancy, but this staple diner breakfast dish always hits the spot.

Let us introduce you to familiar faces from some of our favorite places.

Our Own Cup of Joe

Tina Lallo's neighborly ribbing is part of the experience at JT's Diner.

Small plates and a sweet ending worth ordering.

Burgers are a faint memory with these fun meat-and-bun combos.

Walking away hungry is not an option with these oversized dishes.

Set the alarm. These breakfasts are worth waking up early.

Here are more tastes we can't stop thinking about.

Landmark moments from our past.

Bicycling enthusiasts didnt get their wish, but plans for the new Innerbelt Bridge are impressive. Walsh Construction of Chicago was chosen to build the $287.4 million structure by fall 2013. Although a rival firm filed suit claiming the design doesnt mee

You may have never heard of C. Ellen Connally, but the former judge just might become the most powerful force on the county council we elect this month.

Life According to Dan Coughlin

He went toe-to-toe with Muhammad Ali and waded into the madness of 10 Cent Beer Night. Dan Coughlin's four-decade career as a Cleveland sports reporter has spawned Crazy, With the Papers to Prove It, a new book of behind-the-scenes tales that off

Rant: Where Are All the Diners?

David Franklin, the Cleveland Museum of Art's new director, is a Renaissance scholar who's lived in Venice and Florence, written two books and organized successful, groundbreaking exhibitions. Now the multitalented art historian takes on the job of waking

No LeBron, no problem: Why new Cavs coach Byron Scott is the guy to fix our deflated basketball ego.

A Temple to the Stage

Beer Night: Punched in the Jaw

From Dan Coughlin's new book, Crazy, With the Papers to Prove It

Are museums built around a famous writer's home really worth the investment?

The Cleveland Play House trades one holiday staple for another with a one-man stage version of the classic 1946 film It's a Wonderful Life.

From Dan Coughlin's new book, Crazy, With the Papers to Prove It

Charming Charlie celebrates all the hues of the rainbow with its well-edited and well-priced accessories store.

No need to make a list and check it twice. We've found great gifts for those special people in your life.