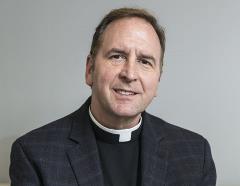 The Rev. Bob Stec is the pastor of Brunswick’s St. Ambrose Catholic Parish and the founder of Greater than Heroin, a cross-denominational coalition of more than 300 Northeast Ohio religious leaders dedicated to advocacy and raising awareness. 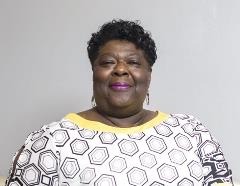 Valeria Harper is the CEO of the Alcohol, Drug Addiction and Mental Health Services Board of Cuyahoga County. Harper oversees the county’s publicly funded drug treatment and mental health programs. 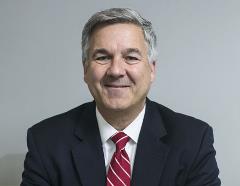 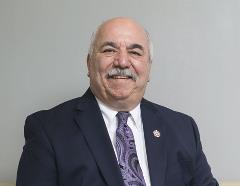 Cel Rivera is chief of the Lorain Police Department. Under his leadership, Lorain became the first police department in the state to carry Narcan in 2013.

The Rev. Bob Stec: I can tell you a simple story. It started in Brunswick, Ohio. Middle-class America.

Back in February, we had a room filled with [Medina] County leaders — 45 of them.

Three of my members from the ages of 68 to 72 are walking past. They were painting a room together. They came in to have some lunch and everyone’s going around and introducing themselves.

The first guy stands up and he says, “My name’s Dave. I have no idea why I’m here, but now that I understand this, my grandson’s an addict.” The next guy stands up. “My name is Steve. I was painting the other room. I came in for lunch. My [son] is an addict.”

It gave me a heart attack. The third guy stands up. “My name is Bob, and my grandson’s best friend died two weeks ago of an overdose.”

Valeria Harper: We need more of everything. We need to be open to new models that other states have tried with the epidemic fairly in its [early] stage in terms of the addition of fentanyl over the past three years.

David Matia: I’m not optimistic. We are poorly equipped in this country to handle dependency. We were behind the curve when this public health epidemic started and we’ve done very little to address how we treat dependency.

The people at this table have done an excellent job, but we need major changes to our health care infrastructure.

We need our hospitals to step up to the table and help us dig our way out of a hole that they helped create by their overprescribing practices. We need more detox centers.

We need more physicians who have waivers that are enabled to provide medication-assisted treatment in the form of Suboxone, [which can be used to relieve heroin cravings], or buprenorphine. It’s scientifically shown to be the best way to help with recovery. There are only [100] doctors in Cuyahoga County who have waivers. It’s kind of shameful.

Cel Rivera: In Lorain in the last four to five years, we’ve just been devastated. Law enforcement and everybody in general were pretty slow to recognize what was happening. In 2011, we had 22 overdoses. At that time, it was prescription opioids. In 2012, actually less than a year later, we had 60. That’s eventually what led us to fighting to get Narcan in the hands of our police officers.

We’re averaging sometimes three, four, five, six overdoses [a day]. Not all of them fatalities.

We’ve seen a large increase in everything from burglaries to breaking into cars to robberies. It’s not unusual for us to get calls in the middle of the day, middle of the morning, at a fast food restaurant with somebody overdosed in the car. We had a young man who came home and found both his parents in the garage dead at the same time. It’s an epidemic that touches us all, and I guess I’m just frustrated by the fact that it doesn’t seem to me to be internalized by most of our citizens.

Matia: The chief, and his department, and departments like his who use Narcan should be praised.

You go into a form of withdrawal. So the dependent person gets thrown into withdrawal and his brain is telling him to go back out and use to alleviate that dope sickness feeling.

If we had an infrastructure where the Lorain police could take them to the ER and there’s a medical professional on hand who can talk to them about administering them buprenorphine that would control those withdrawal symptoms, their brain would stop screaming for heroin.

Then they could focus on whether, “Is this the point in time I want to get clean?”

We have to promote harm-reduction strategies like they use with police and Narcan. We have to build the infrastructure that the well-meaning police can hand off their overdoses to help them turn the corner toward recovery.

Stec: Part of it’s shifting our mentality. Back in the ’70s or the ’80s Nancy Reagan was running around and saying, “Just say no to drugs.” Well, we all laughed and we all joked, right?

At one point, there has to be a message about that, that says that all this is not healthy or life-giving. I think another piece to this puzzle is really helping people to find healthier recipes to living. It’s only going to stop once the collective will says, “We’ve had enough of this, and we’re all going to work together.”

Matia: We’re in the midst of a war right now, but it boggles my mind. People keep coming to this, young people who feel invincible who have poorly formed frontal lobes or not fully developed frontal lobes. You’re at a party. Somebody gives you something to snort. You think, Hey, one time. No. One time’s too many.

Harper: We do have some soldiers who are on the ground, and I think it’s an untapped resource. There are individuals who have a long history, long-term sobriety that can now be certified by the Department of Mental Health and Addiction Services who are strong in their recovery. Let’s plant some of those recovery coaches, if you will, in an emergency room for that person who was revived for the ninth time to be there by the bedside to say, “Let me talk to you about recovery.”

Matia: It’s clear that we wouldn’t be knee-deep in heroin deaths without the overprescribing of medication. I’m a statistics guy, and we’re not dealing with just anecdotes here. From 1997 to 2010, the average per capita of pills per Ohioan went from [seven] pills to 67 pills.

The question is: “Why has the market been flooded? Why have medical professionals that we turn to, that we trust with our lives and our children’s lives, why have they failed us so badly?”

I’m sure many of your readers with MD’s are going to be unhappy with my comments. I don’t care anymore. I’ve seen people die regularly that I know, that I’ve had in drug court. [Nationally,] we lose more people now every year to overdose than we lost in [nearly] the entire Vietnam War.

Rivera: I was a narcotics officer back in the ’70s, and heroin was a problem then. It’s more dangerous now because of the fentanyl and all the other things that they’re mixing with it.

I think most law enforcement agencies have come to the conclusion a long time ago that we’re not the answer and that we’re never going to arrest our way out of this problem.

Their addiction has control over them, and they’re not going to seek out that help until they’re really ready.

Harper: We’re a system that operates at banking hours and we have got to figure out a way to expand the services. It’s frightening for me as a public servant in behavioral health that a person must wait at times — up to four weeks for women, up to five weeks for men.

How do we fix this? How do we get better at it? Of course, at the core of these conversations is funding.

Rivera: Narcotics has now become the biggest problem in our city, in our county. A lot of our city money has been taken from the state. That’s money that we can use locally.

It’s going to take somebody from the national level, at the federal level, and the state level to really understand that this needs a huge investment and make it available to every part of this team.

There’s no money for treatment and there’s no money for enforcement. Enforcement is still important because you have somebody out there who’s trafficking in this. You have people who are creating and producing synthetic fentanyl. It’s difficult to stay on top of it, because they’re always changing the compounds.

Harper: Even if we get neck and neck with it, I’m not sure we’ll ever be ahead of it. Let’s make sure that our dollars are best prescribed based on the community in which the dollars are funneled to.

Stec: If you think about public health crises, when Zika was a problem, literally the world aligned its best resources to eradicate that.

Matia: Put yourself in the shoes of somebody who uses. They’re not using [opioids] to get high necessarily anymore. They’re using them to avoid getting sick. So they fear the withdrawal symptoms.

We need more places where they’re going to get drugs such as Suboxone and buprenorphine to make that withdrawal tolerable so they make the decision then to walk toward the light.

Harper: An abstinence-based model does not work. It’s not nearly as effective as medication-assisted treatment.

The behavioral health world must really become a system of benevolence and tolerance. We can’t ignore an individual who has their 19th bout in detox, because recovery is so individualized and so personalized that it becomes challenging.

Who are we to decide that this person is not yet ready?

Stec: There’s 100 reasons why we should all be engaged and really become much more passionate and involved in this.

The Opioid Crisis: What to Know Now

Cuyahoga County Medical Examiner Dr. Thomas Gilson talks about the fight against opioids, the benefits of Narcan and what might be next.

Three individuals who wrestled with opioids talk to us about finding sobriety.

Our Epidemic: Finding A Voice

After losing her daughter to an overdose, Sheryl Hirsh has become an advocate for those we've lost.