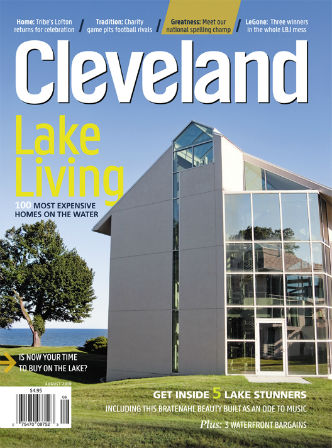 Forest City gets into urban farming with its Terminal Tower rooftop garden.

Headed for the Border?

Nope. My crime was walking while looking Hispanic.

Before Carl Stokes, there was Thomas Fleming, Cleveland's first black city councilman. But since he took office 100 years ago, Fleming, who rose to the heights of political power, has been almost erased from our public consciousness — all over $200 and a

Queen of the Bee

After schooling 272 other competitors at this year's Scripps National Spelling Bee, Anamika Veeramani settles in for the summer and talks about the path to being America's top speller.

A speeding ticket turns a Cleveland fan into a public enemy.

As Cleveland tends to the gaping wound in its civic psyche, we thought it important to point out the local winners in this whole taking-my-talents-to-South-Beach episode. Yes, we said winners.

The 100 Most Expensive Homes on the Lake

Using information provided by county auditors, we compiled a list of the homes with the highest appraised values from Lorain to Lake county.

After years of having its way in Cuyahoga County, the Democratic Party has elected Stuart Garson to clean up what's left in the wake of a corruption investigation, government reform and shaky power base.

Turn Back the Clock

Edward Douglas' Ohio-made film The Dead Matter finally gets a DVD release, but the journey from the cutting room to your living room hasn't been easy.

Out of the ashes of one of Akron's most impressive upstart theater companies comes a humbled but optimistic vision.

Our picks from Cinema at the Square's lineup of classics.

Their plans for life on the lake didn't turn out as they had hoped, but the Blakes draw comfort from the beauty of the water and the gardens at their Lorain home.

Kyle Camp and Mark Walls began work on their dream home seven years ago. Today, their sprawling, beuatifully appointed estate is a slive of waterfront living at its best.

Banyan Tree duo create a fair-trade line inspired by the evolution of womanhood.